(The original premise: "Mainly banter, slightly rambling reminiscences, a little bit political, slightly cultural and a touch of publicity for my bar in Brittany".)

Regrettably my Pub 'Tavarn Ty Elise', a little bar in the Breton countryside between Uhelgoad (Huelgoat) & Karaez (Carhaix), (Bro Gerne) Finistere, Breizh/Llydaw/Brittany/Bretagne burned down in the early hours of friday February 19, 2010. Thirty years of my life up in smoke, but in spite of that the phoenix has risen again and the red dragon is back. 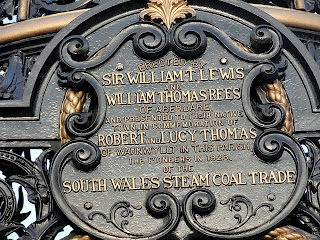 Just one point on 'The Story of Wales' the other night: as every Merthyr person knows who walks past the fountain at the bottom of town and bothers to read the writing on the plaque; it was Lucy Thomas, mine owner of Waunwyllt, Merthyr who opened up the South Wales coal field in 1828, 23 years before the opening up of the Rhondda Valleys, after she realized the commercial value of her high quality coal and took it up to the merchants in London. There were already 50 odd pits in the Merthyr area but they served the ironworks to smelt the iron. It was thanks to this pioneering entrepreneur, female at that, that David Davies of Llandinam and John Nixon of Merthyr Vale & Aberfan fame risked investing their last pennies in digging to the bowels of the earth. The programme showed the coalfield expanding around the Rhondda Valleys, but it was Merthyr that led the way to the opening up of the Rhondda & the other valleys, once more contributing to the wealth of Cardiff after it had already made Cardiff rich on the back of the iron trade.
Posted by Bynbrynman at 14:31

The discoloration on certain cards is from the cigarette smoke and open fire due to having been pinned to the ceiling for many years.

Destiny of the Britons - Taliesin

"If they decide to unite," he said, "they would be completely invincible. This nation would be fortunate....if they could accept one prince, and he a good one." - Gerallt Cymro (Giraldus Cambrensis)

The result was that the king, Henry II, with his mighty army, was forced to retreat, and in his anger he blinded his hostages and burned the churches.

At a time when the vast majority of the French abandoned their fate into the hands of Marshall Pétin, many Bretons chose, and that as early as 1940, to go to England to continue the fight. At the end of 1940 the Bretons made up 70% of the resistance while Brittany only comprises 7% of the French population. The resistance went on to attract more and more men and women, yet at the end of 1943, only six months before the Normandy landings, the Bretons still represented 40% of the Free French. This is not to forget the resistance in Brittany itself, a vast uprising of the whole people, which retained many German troops in the peninsula, for these, had they been allowed to reach the Normandy front, would have pushed the Allies back to sea. It is also thanks to the Bretons that France, whose authorities had massively collaborated with Nazi Germany from 1940 to 1944, could recover her honour. The brutal repression which was triggered after D-Day against all forms of Bretonness, seems all the more disgraceful. Bernard Le Nail


Joseph Parry worshipped in this chapel as a young boy before going "off to Philadelphia in the morning". One day I received a note from Margaret Roberts, Emrys's wife asking me to volunteer to help to clean it out, which I was happy to do. Later on John Jenkins had an office there and I used to go down to see him for a chat at lunch time."

2004 Bi- Centenary Limited Edition No. 110 out of 200, a gift to me from Llinos Davis representing the school

The first steam locomotive to run on rails in the world, Feb. 1804

Designed by the children of Ysgol Santes Tudful, Merthyr Ty(u)dfi(u)l